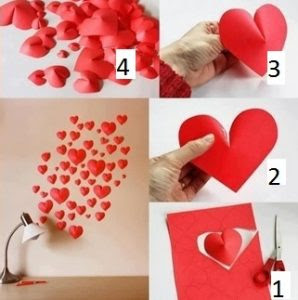 How to Design Rooms and rooms in your house to make it look more attractive with a heart-shaped 3-dimensional wall decoration from Origami Paper will make your wall look more beautiful and attractive. This will also have a noticeable effect on the walls of the house.
– Prepare 10 pieces of red and pink origami paper
– Then also prepare scissors, pencils and tape
– Prepare 3 red origami paper and then form a large heart drawing pattern using a pencil
– After all the paper has been patterned into a heart image, the next step as in picture number 1 is origami paper scissors according to the pattern that has been drawn
– After that the curve of the liver is given a bit of masking tape like picture number 2
– Then put together like picture number 3
– After all the liver pictures are taped, save them first so they don’t get damaged
– After that, take the remaining red and pink origami paper
– Make a drawing pattern with a small heart-shaped pencil on each origami paper
– After completing the pattern, cut out all the paper according to the pattern you have drawn
– The curve of the liver is given masking tape like picture number 2
– Then unite the portion of the curve of the heart that has been taped like picture number 3
– After all the heart images are finished, you can immediately apply them to your bedroom wall
– Attach a bit of masking tape to the edge of the heart and arrange it like a picture of a flying heart 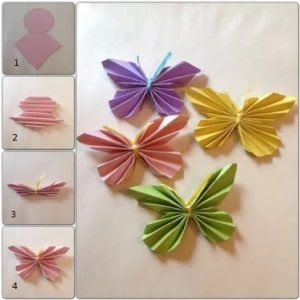 Wall decoration with Origami paper in the shape of a butterfly is very suitable to decorate and beautify the room inside the house. With a variety of origami paper colors make this butterfly-shaped decoration even more beautiful. This butterfly shape is very suitable also for bedroom decoration. How to make butterfly-shaped wall hangings from origami paper, namely:
– Prepare several origami paper with different colors, ruler, pencil, and also a colorful ribbon
– Make a pattern like picture number 1 using a pencil and a ruler
– Make as many picture patterns on number 1 as you want
– After drawing patterns with origami, the various colors do the next method, like number 2, which is folding the origami paper forward and backward
– After all the drawing patterns have been folded, tie the center of the origami paper like number 3
– Strong string of origami paper so it doesn’t come off easily
– Then spread the wings of a butterfly as in picture number 4
– Do the way number 4 on all patterns of images that have been folded
– Be a butterfly with various colors
– But if you want this butterfly to fly, then you have to prepare a thread and a needle
– Put the thread in the needle’s eye then pull the thread as you want how long
– After you determine how long the yarn is, then tie the end of the thread
– Then the back of a butterfly from origami paper is pricked using a needle that has been given a needle
– Pull the yarn and do the method above to get a butterfly sequence
– In addition, if you do not want to bother, you can also directly apply butterflies from this origami paper to the wall of your living room or room by coating the back of the butterfly with glue. 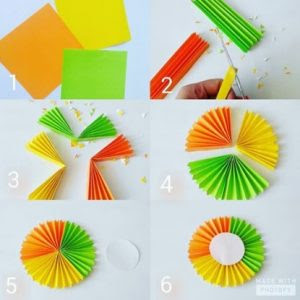